Cycling as a way of getting to the workplace and elsewhere is certainly becoming more popular in India even among people who can afford to own a fuel-powered vehicle. The change is happening largely among the environment and health conscious population of the metros – the crowd of Bangalore being at the forefront.

Was a time, of course, when people cycled more simply because they could not afford anything else – neither a car nor a two-wheeler. Nobody cycled out of choice – as soon as they could afford one, they switched to a two-wheeler, and then a four-wheeler. No wonder, the Atlas cycle was called the Doodh-waala cycle!

Among the conscious younger generation of working professionals there is a new interest in cycling as a mode of transport, and as a sport. Some of this is fuelled by fitness goals, some by carbon-footprint consciousness – mostly a combination of both. And people are cycling in style, on bikes that can help them cycle long distances without discomfort. 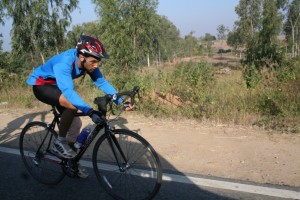 Its not exactly a trend, too few people are into it to call it that, and it is localised to some metros it seems, but the number of health-and-environment conscious people who are riding as and alternative to driving seem to be on the rise.

Sadly, neither our roads, nor our traffic are really ready for this.

Neither, it seems, are we socially ready to accept the phenomenon of people sweating through rain and shine when they could be comfortably sitting in their AC cars.

Appa, cycling to office one day with his helmet and all, was tagged by an auto-driver all the way to office, who at first out of concern offered to give him a ride to office. When he realised Appa was dead serious about cycling, concern gave away to astonishment followed by mirth. He spent the next 15 minutes heckling as an irritated Appa tried to cycle up the slope to his office.

Inspite of the pot-holes and the laughter on the roads, the cycling population is growing, and tours such as the Tour of Nilgiris, a 900 km, 7 day tour through the beautiful Nilgiri hills, are helping spread the enthusiasm.

For the sake of our clogged arteries and clogged roads – lets hope that this catches on, and more and more of us use this practical, fast and healthy means of transport whenever we can.

Two conversations in the space of two days that simply floored me. Do all 2 year olds talk like this?

N: No Deuta, we’ll go to Chutney’s restaurant and have idlis there.

< I think my idea of eating out was a samosa or two on the way to my grandmom’s place until, like, the age of 15 maybe. The times, they are a changing>

Me to N: Okay, you want to play at home or go downstairs and play.

< Again, when we were kids, shopping was not a happy thing. It was a thing Ma and Deuta had to do so we could eat. And clothes shopping – why, that happened twice a year, at Bihu and Durga Puja>

I suppose I have only myself and Appa to blame for this !

To see Gypsyfeet in the media. We are featured in the Travel Section of Live Mint today.

We fixed the itinerary for our Bhutan trip, and are very excited by the response we are getting from people 🙂

Here are the details of the trip.

Pack your bags and get going with..

Visitors to this blog